Punctuation Is Your Friend… 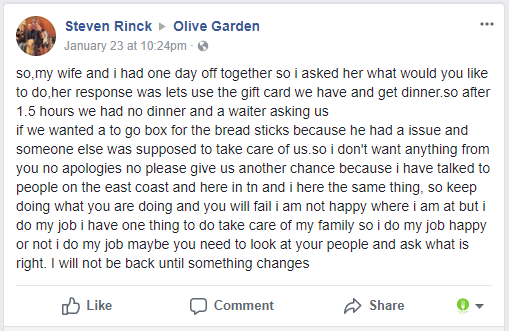 Steven to Olive Garden:
so,my wife and i had one day off together so i asked her what would you like to do,her response was lets use the gift card we have and get dinner.so after 1.5 hours we had no dinner and a waiter asking us
if we wanted a to go box for the bread sticks because he had a issue and someone else was supposed to take care of us.so i don’t want anything from you no apologies no please give us another chance because i have talked to people on the east coast and here in tn and i here the same thing, so keep doing what you are doing and you will fail i am not happy where i am at but i do my job i have one thing to do take care of my family so i do my job happy or not i do my job maybe you need to look at your people and ask what is right. I will not be back until something changes

What started as an innocent post to the Cracker Barrel Facebook Page from a guy named Brad, quickly spiraled out of control on early Tuesday morning.

Brad demanded answers for why his wife was fired from Cracker Barrel earlier this week and boy did he get them! Once someone responded with a smart ass comment it opened the door for thousands of other trolls to feed off of Brad’s post. And what happened next may be the best thing to ever happen in the history of Cracker Barrel Internet History!

The Deathly Allergy At The OG

I will never understand the people who have a deathly allergy (or worse, their kids do) and they put their trust in a complete stranger working at a restaurant and expect their server to be a licensed dietitian…

How Dare You Charge Me Extra On My Birthday!

Birthday Entitlement…got to love it!

I’m so disappointed in my favorite restaurant. First you get rid of the hot towels. Then you make me bring someone with me in order to use (my) BIRTHDAY coupon so that you can get some extra money on the side and so you don’t feel like your missing out on some extra cash and then…….. YOU REFUSE TO PUT EXTRA GARLIC BUTTER ON CARRY OUT RICE THAT IS TYPICALLY DRY!!!! WHICH I KNOW SINCE I GO EVERY FRIDAY FOR LUNCH. And to add insult to injury you have the worst manager managing your location in Farmingion Hills, MIchigan at 21150 Haggerty Road. She needs a refresher course in customer service. I think she should be replaced with someone who actually likes their job and values others as people and not as walking dollar signs. It took three separate instances of bad service before I was forced to address this on their home page. Please let people who do not dine in have the choice of having extra garlic butter added to their rice in stead of trying to charge them. Your not charging for extra garlic butter at the table…. are you?

A woman suffered a heart attack during a New Year’s Eve celebration at a downtown Indianapolis bar, but a customer’s complaint about the response fueled a social media firestorm.

According to a manager at Kilroy’s Downtown Indy, a 70-year-old woman suffered the heart attack while celebrating New Year’s Eve with her family. A customer named Holly Jones took to Facebook to complain that the response to the event ruined her holiday celebration. The woman said she believed someone had suffered a drug overdose and was upset the wait staff wasn’t attentive to her and her guests:

“I will never go back to this location for New Year’s Eve!!! After the way we were treated when we spent 700+ and having our meal ruined by watching a dead person being wheeled out from an overdose my night has been ruined!!! Every year we have come to Kilroys to enjoy New Years Eve and tonight we were screamed at and had the manager walk away from use while (we) were trying to figure out our bill being messed up. The manager also told us someone dying was more important then us being there making us feel like our business didn’t matter, but I guess allowing a Junkie in the building to overdose on your property is more important then paying customers who are spending a lot of money!! Our waitress when we were trying to ask about our bill being messed up also said “what do you want me to do (expletive) pay your bill for you?” What a great way to talk to a paying customer! I get that working on New Years Eve (is) stressful but being a complete (expletive) to us all night knowing you get an automatic gratuity is not right!!!”

Kilroy’s manager Chris Burton replied to the woman’s post and clarified the woman had not suffered a drug overdose, but had a heart attack.

“First of all, the “overdosing junkie” that you speak of was a 70-year-old woman who had a heart attack. Thankfully she was revived at the hospital and survived. It sounds like you were very concerned about her so I thought you should know. This poor lady, who was celebrating New Year’s Eve with her husband and son, had to be placed on the floor of a completely packed bar and have her shirt removed in front of everyone so the paramedics could work on her.

But I completely understand why you think being intoxicated (expletive) that didn’t understand your bill should take priority over a human life. I especially appreciate you making your server (who doesn’t curse) cry as well. I’m sure she really enjoyed working on New Year’s Eve just to deal with people such as yourself. I personally had to leave a show to take a phone call from an emotional manager telling me someone died at Kilroy’s and that other employees were not doing so well dealing with this. (At the time they didn’t know that she was going to make it.) So I understand how inconvenient this was for your night.

But honestly, I’m glad to hear you won’t be coming back to Kilroy’s because we wouldn’t want anyone as cold hearted and nasty as you returning. I appreciate anyone who chooses to spend their money at Kilroy’s until they act like you. You can take your money anywhere else after that, and I won’t lose a second of sleep over it. Happy New Year!”

In a follow up post, Kilroy’s said the woman survived, but still has a long way to go. The bar encouraged customers to support her recovery. Her family has created a GoFundMe page to help pay for her medical expenses.

The bar also told people that there were several people named “Holly Jones” on Facebook and urged people not to send hateful messages to them. It added the woman who made the original post has since taken down her Facebook profile.

People from around the globe have been posting to Kilroy’s Facebook page praising Burton for his reply.

UPDATE: Since posting the story at 10:30 A.M., donations to the family’s GoFundMe page have more than doubled and surpassed the $5,000 they were asking for.

Stephanie: We went to Carraba’s last night for a birthday dinner. We had a party of 8 adults, so we called ahead for a 5:30pm seating (we actually called twice to assure we would have a seat). When we arrived, we were told it would “be a few minutes” so they could push the tables together. After 30 minutes, still no table. The hostess refused to push together two 4 top tables for us to sit at and since one party (that did not call ahead) was taking up both 8 top tables, we would not be seated until they were finished and gone. We ended up waiting an hour before walking out and finding a different restaurant.
The staff at Carraba’s was very unorganized and not helpful at all. We saw 2 full trays or drinks and food get dropped within 5 minutes of each other. It took 15 minutes for the staff to clean up the broken glass on the floor. During that 15 minutes, at least 10 staff members walked by the mess without doing anything. It took a very long time for tables to get bussed and then seated. We watched a couple at the bar (with a pager) be completely forgotten about while multiple other parties were sat before them.
I am completely disappointed with the lack of customer service in this restaurant. I hope this review helps other patrons avoid this type of issue in the future.

So would you have preferred the staff ask the people who “didn’t call ahead” to move so that your party could sit? They can’t magically make people disappear who got there BEFORE you. The world unfortunately does not revolve around you lady…